Missed the March crash? Huge opportunity coming up in the stock market- The Traveling Trader.

US stock market has a history of volatility from bear to bull and bull to bear. The Traveling Trader says that grabbing the correct opportunity to invest, and playing with an awareness of tendencies of the market will not only saves you, traders, from the stress during critical market movements, but can also help in making promising gains.

As the title of the video suggests: If you traders have missed the US stock market crash of March 2020 (as per S&P500), do not miss the huge opportunity of the upcoming Bullish market and to understand which stocks to hold and buy through the wave of upcoming uncertainty The Travelling Trader is here for you. 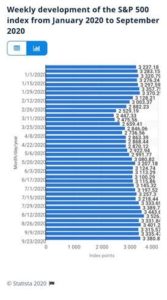 Factors of the US stock market crashing down:

A bear market occurs when the value of a stock market suffers a prolonged decline of more than 20 percent over a period of at least two months. The COVID-19 pandemic caused severe concern and sent stock markets on a steep downward spiral. The S&P 500 achieved a record closing high of 3,386 on February 19, 2020. However, just over three weeks later, the market closed on 2,480, which represented a decline of around 26 percent in only 16 sessions. Resulting fastest bear market.

Traders we all know that slowly and steadily Americans have started living with the pandemic “the new normal”. We are not ready to compromise their economy anymore. Resulting in better Consumer behavior and non-anticipation of lockdowns. We have seen increases in no. of infected cases but a decline in the death rate. That means the USA has developed better methods to deal with it collectively.

According to the textbook definition, sense homebuilder sentiment is at a record high and the US is in fact on track to record a 30 GDP growth which would be a new record, US Retail sales are blowing expectations, auto sales are surging and US jobless claims have fallen to almost the lowest level since the pandemic started first.

We are officially now in a bull market marking the fastest bull market that is 20 percent high over a period of two months. Momentum gives birth to momentum, US Stock Market history is proof that the Bull market lasted for more number of years than then Bearish market.

How the stock market will react to elections? 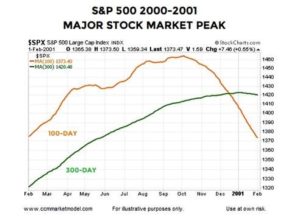 There is only been one time in history that the US Stock Market established a bull market that has not lasted for multiple years that happened back in 2001 during the dot-com the bubble that is the contested election between George W Bush and Al Gore, as we take a look at the S&P500 weekly chart, we can see that from September highs, the market dropped almost 37 to November 2001.

Bull markets actually last a lot longer than bear markets in the US stock market history. Bull markets last an average of above 1700 days and bear markets last an average of around 360 days 2000-2001 was the fastest bear market in history and the fastest bull market in history. The number of days might not be that big of a sign because the percentage drop was also the most violent within the shortest amount of time the S&P500 dropped around 34% and NASDAQ by 24% in the shortest amount of time and the average bear market drop is 37%. This historical record is actually leading to favorable for current market conditions and if the predictions are solely based on history, whether we hit a stock market crash or not?  My answer would be NO.

A correction drop of more than 10 percent correction is more plausible than another bear market or market crash. Thus a stock market crash to be a rather implausible scenario

With effectively zero percent interest rates there is nowhere to put money, that’s why the stock market is flooded with investor money at the moment along with fed interjection of course so far the stock market looks like it’s in a rotational recovery-mode more.

A double top on the daily chart now. Traders can observe this is a bearish pattern as the price action tries to re-test resistance and fails to form double top investors lose a little bit of short-term confidence and the stock market continues to drop. The volatility usually lasts just a short amount of time until the election is over and then once the election is over leading into the holiday season we usually see a lot of positive bullish short-term sentiment and the market continues its rally again. If the market is already in a bull market like we are now then the market will further propel its gains

The traveling Trader Conclusion1: for the long term investors, especially if we are already in a bull market, it could undoubtedly have short-term effects and short-term effects could yield a lot, then changing the strategy just for the few weeks that a contested election will take is really not considerable.

“Don’t really change your investment strategy based on some volatility.”

It does not really matter in the long term which party the presidential candidate comes from as long as it’s one of the two main parties as a matter of fact in recent history the stock market has performed extraordinarily well under democratic candidates like Clinton and Obama but the same thing can be said for Trump, George Bush the father and Ronald Reagan so in the long term it doesn’t really matter and this definitely shouldn’t be used as a gauge of whether the stock market will crash or not.

Effect of a pandemic on the stock market

Economic turmoil associated with the COVID-19 pandemic has had wide-ranging and severe impacts on financial markets, including stock, bond, and commodity (including crude oil and gold) markets.

On Monday, 24 February 2020, the Dow Jones Industrial Average and FTSE 100 dropped more than 3% as the coronavirus outbreak spread worsened substantially outside China over the weekend. This follows benchmark indices falling sharply in continental Europe after steep declines across Asia. The DAX, CAC 40, and IBEX 35 each fell by about 4% and the FTSE MIB fell over 5%. There was a large fall in the price of oil and a large increase in the price of gold, to a 7-year high. On 27 February, due to mounting worries about the coronavirus outbreak, various U.S. stock market indices including the NASDAQ-100, the S&P 500 Index, and the Dow Jones Industrial Average posted their sharpest falls since 2008, with the Dow falling 1,191 points, its largest one-day drop since the 2008 financial crisis. On 28 February 2020, stock markets worldwide reported their largest single-week declines since the 2008 financial crisis.

Following the second week of turbulence, on 6 March, stock markets worldwide closed down (although the Dow Jones Industrial Average, NASDAQ Composite, and S&P 500 closed upon the week), while the yields on 10-year and 30-year U.S. Treasury securities fell to new record lows under 0.7% and 1.26% respectively. U.S. President Donald Trump signed into law an emergency appropriations and pandemic countermeasures bill including $8.3 billion in government spending. After OPEC and Russia failed to agree on oil production cuts on 5 March and Saudi Arabia and Russia both announced increases in oil production on 7 March, oil prices fell by 25 percent. The role of cross-border flows of goods in the modern economy, driven by decades of falling transport costs, falling communication costs, and, until recently, falling tariffs.

Overall, stock markets declined over 30% by March; implied volatilities of equities and oil have spiked to crisis levels, and credit spreads on non-investment grade debt have widened sharply as investors reduce risks. This heightened turmoil in global financial markets is occurring despite the substantial and comprehensive financial reforms agreed by G20 financial authorities in the post-crisis era.

On the morning of 9 March, the S&P 500 fell 7% in four minutes after the exchange opened, triggering a circuit breaker for the first time since the financial crisis of 2007–08 and halting trading for 15 minutes. At the end of trading, stock markets worldwide saw massive declines (with the STOXX Europe 600 falling to more than 20% below its peak earlier in the year with the Dow Jones Industrial Average eclipsing the previous one-day decline record on 27 February by falling 2,014 points (or 7.8%). The yield on 10-year and 30-year U.S. Treasury securities hit new record lows, with the 30-year securities falling below 1% for the first time in history.

On 12 March, Asia-Pacific stock markets closed down (with the Nikkei 225 of the Tokyo Stock Exchange also falling to more than 20% below its 52-week high), European stock markets closed down 11% (their worst one-day decline in history) while the Dow Jones Industrial Average closed down an additional 10% (eclipsing the one-day record set on 9 March), the NASDAQ Composite was down 9.4%, and the S&P 500 was down 9.5% (with the NASDAQ and S&P 500 also falling to more than 20% below their peaks), and the declines activated the trading curb at the New York Stock Exchange for the second time that week. Oil prices dropped by 8%, while the yields on 10-year and 30-year U.S. Treasury securities increased to 0.86% and 1.45% (and their yield curve finished normal). On 15 March, the Fed cut its benchmark interest rate by a full percentage point, to a target range of 0 to 0.25%. However, in response, futures on the S&P 500 and crude oil dropped on continued market worries. Almost 75% of the hedge funds suffered steep losses during this timeline.

As you Traders can observe that Overreaction is expected in the US stock market and the investor should not miss the opportunity, to the liquidity is a must to hold through the bumps of volatility regardless of the investment horizon.

And the most beneficial route to do so is rotational recovery meaning money is being rotated from one sector to the other. As the news comes out and shifts the narrative so for instance, if we get a new wave of infections and we don’t have a vaccine yet then we’ll want to keep paying attention to the work from home stocks this includes stocks like zoom Dousing slack also your cloud-based stocks like Palo Alto networks, Octal, Crowd strike there’s even a work from home ETF called WFH that simplifies things  and  the fast-food stocks and  please do not forget the delivery chains that thrive during this pandemic period of pickup and delivery stocks like chipotle Macdonald’s domino’s papa john’s furthermore retail plays both online and brick and mortar that have thrived during the pandemic Amazon, Big lots target, Walmart, Costco

and if we do get a vaccine recently, traders you should watch out for a huge sector rotation likely shift from overweight work from home stocks like zoom into some of these extremely battered stocks like airlines cruise lines, hotels, restaurants, ride-sharing, and auto companies these stocks are still beat down and there will be a massive opportunity when the time comes just as there was an opportunity back in March for the blue-chip work from home stay-at-home stocks.

The Traveling Trader Conclusion2: For short term investors, if you have not invested in the stock market now is really not the time to do it, because of the upcoming volatility.

If being ultra-bullish on the long term if we get a vaccine, if the election is concluded, if jobless numbers continue to drop, if the stimulus is achieved and we get American businesses reopening more and more than you traders should definitely expect a major boom in the stock market and a continuation of the bullish rally. We have never had a bull market that didn’t last multiple years except for one concise time, and that was back in the dot-com bubble the average bull market lasts 1700 days now there will be some very juicy options place to play around this volatility.